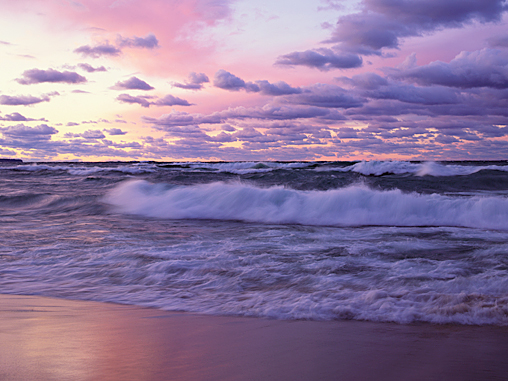 Four of the five Great Lakes are shared by Canada and the US; only Lake Michigan is completely American. Nevertheless, because of the extreme sensitivity and interconnectedness of all five lakes, and their relation to the St Laurence Seaway and the Atlantic Ocean, the US and Canadian governments established the “International Joint Commission” in 1909 to jointly manage and protect the entire waters system, from the Atlantic Ocean to Lake Superior.

The geography of the Great Lakes is too intricate to explain in a blog post, and the millions of rivers and watersheds, the 400,000+ smaller lakes, marshes, wetlands and bays formed by the lakes, and the 35,000 islands that dot the lakes require volumes of books and years of study to understand them all. What can be explained here, and easily understood, is that the Great Lakes have a unique ecosystem filled with rich varieties of life. The large bodies of water create their own micro-climate and affect their own weather patterns over a vast area of the eastern part of the continent.

Formed by melting glaciers more than 30,000 years ago, the Great Lakes have turned Ontario, Ohio, Michigan, New York, Quebec, New Brunswick, Maine and Nova Scotia into one single, vast watershed where all life is deeply interconnected. What happens on the northern shores of Lake Huron will affect the life cycle of rivers in Maine, and so on.

Seal of the International Joint Commission

Researchers don’t mind getting wet and dirty. Fish samples and soil quality are key to tracking changes to the Lakes.

The Great Lakes are basically inland seas. Lake Superior, the second largest lake in the world (after Lake Baikal in Russia), is also one of the deepest bodies of fresh water on the planet, reaching 1500 feet in some places! The massive size of Superior and the incredible depths makes sailing this lake treacherous for novice mariners. Vessel operators require maritime licenses to sail on several of the lakes, including Lake Superior.

Superior’s storms are famous across the continent, and particularly for those people are live along its shores. One of Superior’s legends is the sinking of the Edmond Fitzgerald. This 730-foot transporter out of Michigan was the largest ship on the Great Lakes. In November 1975 she ran into a sudden mega-storm in the middle of Lake Superior. Winds picked up from 5 knots to 58 knots, and at 7:10 pm the last radio message from the Edmund Fitzgerald was received, calling for an SOS and that two main hatchways and collapsed and she was taking on water. Nothing else was ever heard from her again. The ship sank with all 29 hands on board, and no bodies were ever recovered. The wreck wasn’t found until 1990, by then a legend and folklore had sprung up around the ship and the lake. Tales of ghost ship sightings abounded, and the famous 1976 Gordon Lightfoot song, “The Wreck of the Edmund Fitzgerald”, added to the legend of Lake Superior with the line “Superior never gives up her dead”. 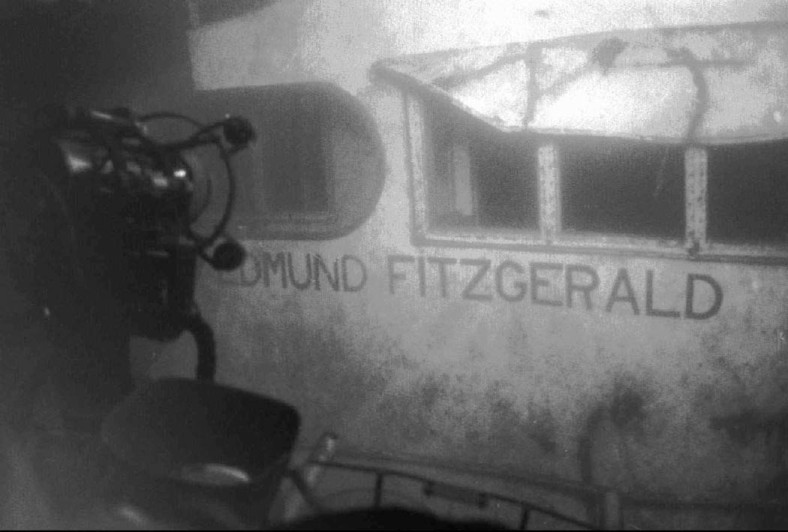 The wreck of the Edmund Fitzgerald, grave of 29 men.

An artist’s rendering of the last moments of the Edmund Fitzgerald. 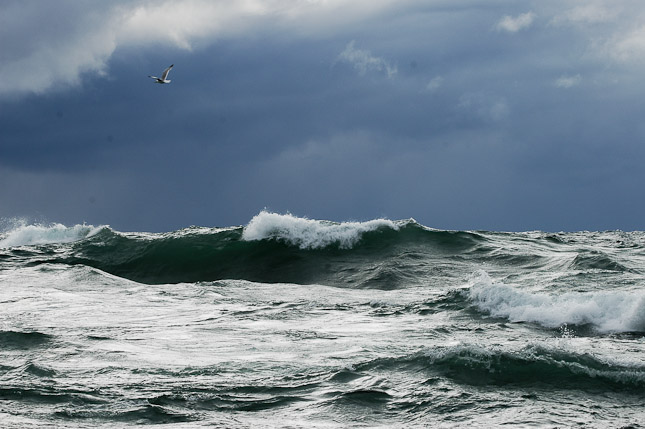 Lake Superior’s storms are brutal. Due to the large body of water rapidly altering dry warm air from the pairies, violent wind and lightning storms can pop up without any warning and are impossible to predict. 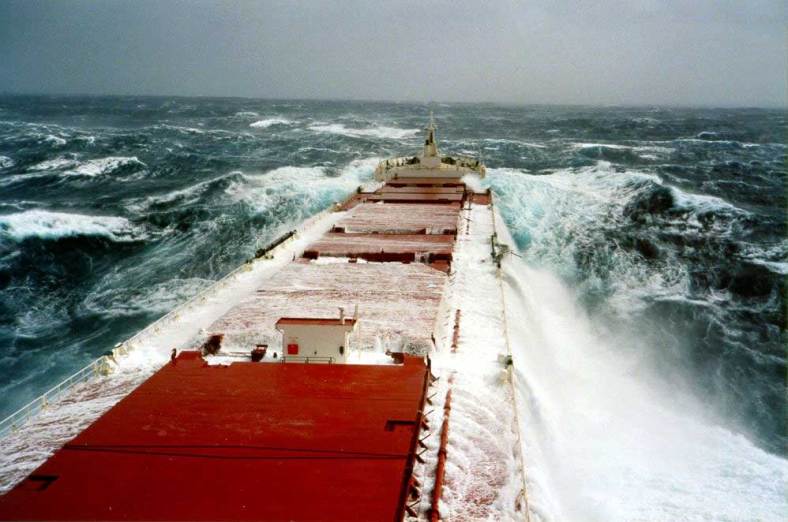 A modern tanker fights through a typical Lake Superior storm.

Other than storms, Lake Superior can be serene, calm and incredibly beautiful.

Lake Sturgeon, once nearly extinct, is making a successful come back with new conservation methods.

Named after the Huron people who inhabited the area when French explorers came through in the late 17th Century, Lake Huron is called the most beautiful of the Great Lakes. Along with Lake Superior, Huron is also the least populated of the Great Lakes. No metropolis cities abound on its shores, and it has stayed relatively clean, fresh and attractive for tourists.

Like Superior, Lake Huron is also famous for its sudden violent storms. In fact, Huron is sometimes called the “Lake of Graves”, due to the high volume of shipwrecks that dot its bottom (more than 1,000 at last count). In 1913 a massive storm blew for more than 16 hours and sank 10 ships along with 235 sailors. Another bad storm in 1980 sank three more ships and claimed the lives of 8 more men. With so many shipwrecks in the lake, a whole tourism industry of glass-bottomed boat shipwreck-spotting has evolved.

Unlike Superior, Huron is relatively warmer in the summer months and hundreds of sandy beaches surround the lake, drawing thousands of swimmers, campers and other tourists every year. The hot, humid summers of Michigan and southern Ontario drive people to the shores of Lake Huron, and the lush forests and lands around the lake have turned into a veritable cottage country.

Sauble Beach, on Lake Huron’s Ontario side, is one example of a popular sandy beach that draws tourists in the summer.

Lake Huron is home to more than 1,000 shipwrecks! 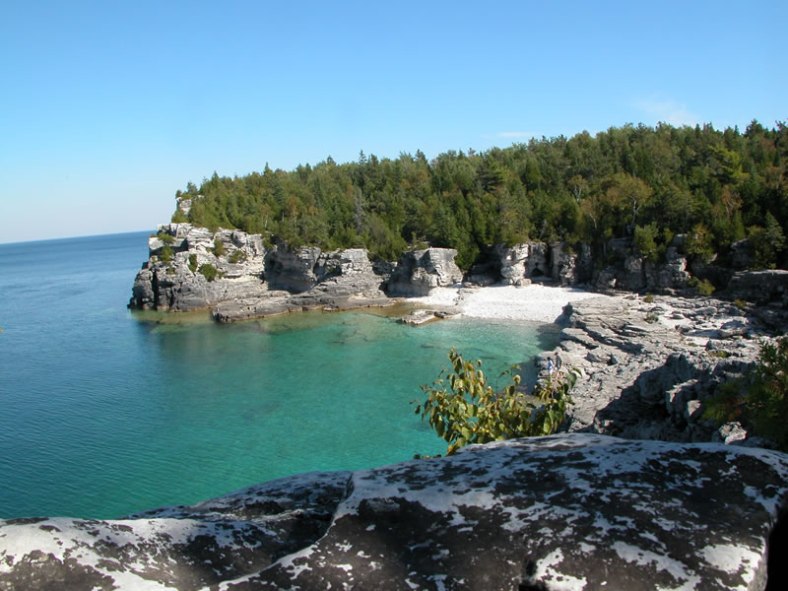 The Bruce Peninsula, which separates Lake Huron from Georgian Bay, is a national park and nature preserve. 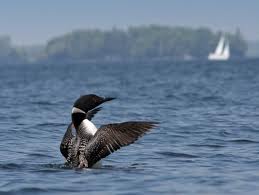 The beauty of Lake Huron

Lake Erie, the southernmost of the Great Lakes, has one of the most troubled histories of the region. Vast amounts of pollution, mainly from industry in Michigan, almost killed off all life in the lake by the 1970’s and it was only a vigorous environmental campaign in the 1980’s that brought the lake back to life. The effects of the polluting of Lake Erie were felt as far away as New Brunswick and Maine, as chemical traces from Detroit factories were detected in people’s drinking water!

Today Lake Erie is making a comeback. The International Joint Commission spent most of the ’80s and ’90s cleaning the lake and lobbying governments on both sides of the border to tighten environmental laws concerning lakefront industry. However, a new threat has emerged in the form of lake drainage. Under the George W. Bush administration, American industrial farming companies were granted permission to drain the lake for irrigation purposes. Vast Ohio factory farms have since been pumping millions of gallons of water every year out of Lake Erie. Between 2004 and 2010 the water level of Lake Erie dropped an incredible 20 feet! Shorelines around the lake retreated by nearly 200 feet in some places, creating a new environmental disaster as wetlands, marshes, rivers and even local lakes began to dry up and disappear, resulting in a massive die-off of wildlife over the past decade. The long-term effects the drainage of Erie will have on the entire ecosystem of the north-eastern continent is yet to be discovered, but it won’t be good.

Pollution in Lake Erie still remains a problem. Most of the pollution comes from factories in America.

The industrial draining of Lake Erie has resulted in the loss of hundreds of wetlands and lakes, like this one in southern Ontario.

Lake Erie is a calm and peaceful lake, with few storms and some spectacular natural scenery.

Tucked between Ontario and New York, Lake Ontario is the easternmost of the five Great Lakes and, like Lake Erie, is also one of the most heavily inhabited and thus most polluted of the Great Lakes. Unlike Erie, which is a relatively calm body of water, Lake Ontario gets high winds and lies on the southern tip of the “Lake Effect” weather system, thus receives some incredible thunderstorms and several hundred tornadoes every year.

Lake Ontario is home to the richest diversity of life of the five lakes, as the winds and storms and unique weather of the lake has created thousands of islands, inlets, bays, watersheds and rivers where life abounds. Lake Ontario is also the drainage point for all the rivers that feed off Lake Huron and has created the rich dark-soil farmlands of southern Ontario. As a result, Lake Ontario is one of the most important of the Great Lakes simply for the sheer size of life and economy it supports.

In recent years Lake Ontario has been under attack. Invasive species have been brought in by international container ships, pollution from the millions of people who live along its shore lines in both the US and Canada, and the effects of global warming are all wreaking havoc on the lake. Efforts to clean and protect the lake have been undertaken in both Ontario and New York, and in 2012 an International Joint Committee report indicated that for the first time the negative trends of shoreline loss around Lake Ontario had been reversed due to new methods of conservation. While the future of Lake Ontario, and the entire Great Lake system, lies in the balance, this piece of news gives some hope that the Great Lakes will continue to wow and awe millions of people for generations to come.

Point Pelee National Park, the southernmost tip of Canada and where Lakes Erie and Ontario meet.

Niagara Falls is a key drainage basin for Lake Erie and Lake Ontario.

Toronto, with more than 6 million inhabitants, is the fourth largest city in North America and the largest city on Lake Ontario. 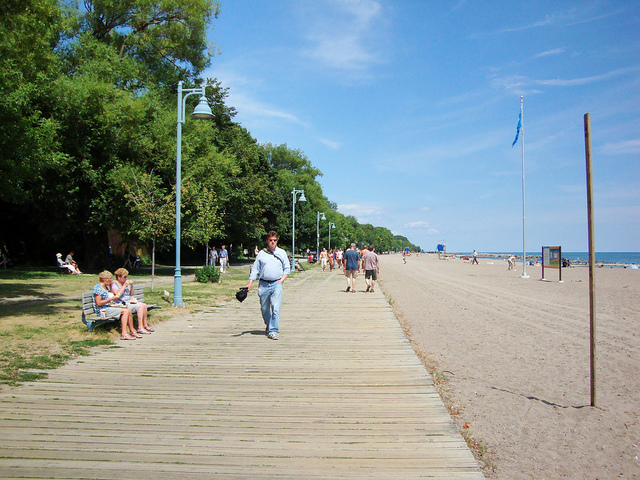 The “Skybridge” from Burlington, Ontario to Hamilton, Ontario is the largest bridge over the Great Lakes. Heavy industry and population in Southern Ontario has created an environmental crisis

The rich farmlands of Ontario are a direct result of the Great Lakes.

A tornado touches down in Southern Ontario, home to hundreds of twisters every year.

Lake Ontario is the place to be for storm watching!

Lake Ontario supports a rich variety of wildlife, which are under threat today.

The St Lawrence Lock System, which brings shipping traffic from the Atlantic to the Great Lakes (and vice versa). 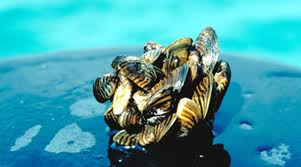 Zebra mussels are an invasive species that reproduce incredibly fast and are threatening all life in Lake Ontario.

Asian carp, another invasive species into Lake Ontario, is aggressive and is destroying all the fish life of the lake.

Thousands of animal species (including humans) rely on the Great Lakes for life.

Some bird and plants species are unique to the Great Lakes. 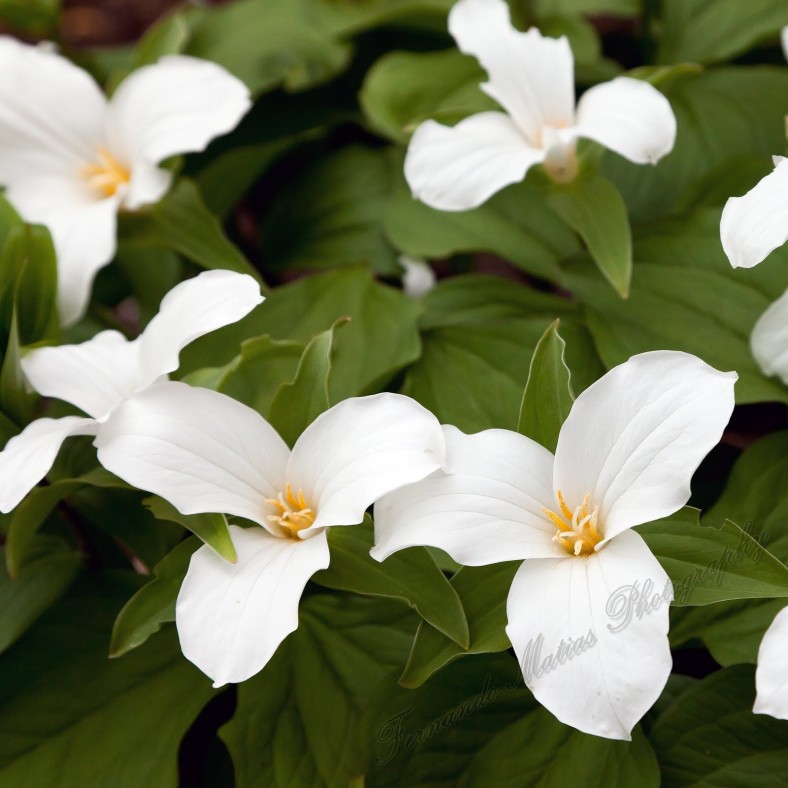 The Ontario Trillium is one example of a flower unique to the area, and found nowhere else in the world (as a result it is protected and illegal to pick).

The importance of the Great Lakes to Ontario’s geography and economy is recognized by the Trillium, the official logo of the Province of Ontario. 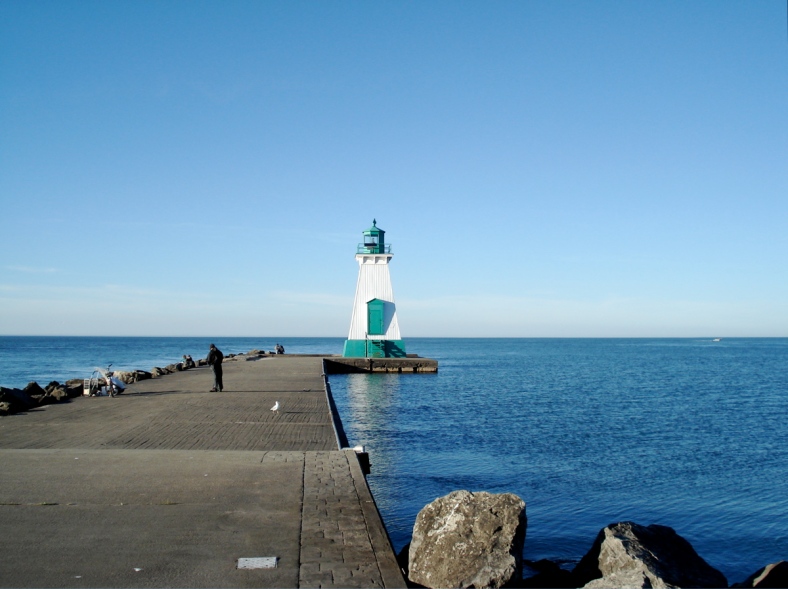 The beauty of Lake Ontario

2 thoughts on “The Great Lakes”