Manitoba was the sixth province to join Confederation in 1870 following the Red River Rebellion and the suppression of the native inhabitants in the region. Manitoba also marks the beginning of the northern half of the North American Great Plains, which stretch all the way to the Rocky Mountains.

The province is unique in that it is the only prairie province, that is, flat and mostly agricultural, which has a salt-water shoreline on the Hudson Bay. It also has the most lakes of all the prairies (over 110,000 of them). From the Ontario border in the east the terrain is hilly and forested but, going west, the trees begin to thin out and the land becomes flatter until, at the Saskatchewan border in the west, the geography is one of vast open plains.

Manitoba was particularly hard hit during the Great Depression of the 1930s, especially when a drought set in and destroyed the farming industry which accounted for over 90% of the province’s GDP. As a result the birth of socialist opposition parties in Canada has occured mainly in Manitoba, beginning with the Farmer’s Credit Party and then the New Democratic Party.
While there is a lot of land, the population of Manitoba is small; 1.2 million people with more than half of them, 660,000, living in the capital, Winnipeg.
Winnipeg rises out of the prairies like an apparition, a strange city of steel and concrete and glass. This city is aesthetically a very beautiful one, and enjoys one of the lowest crime and pollution rates in Canada. Municipal, provincial and private entities have invested lots of money into the city’s arts and culture sector, and as a result Winnipeg can boast having the most museums and theatres per capita of any city in Canada. This makes the hard winters and mosquito-infested summers liveable! 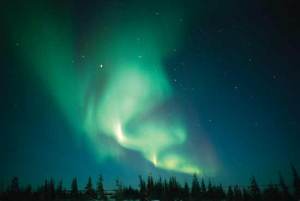 The city of Winnipeg, capital of Manitoba